At Empteezy, we advocate the safe practise of storing and handling liquids. In 1814, the regulations were unfortunately not so strict.

On Monday 17th October, a tragic accident claimed 8 lives in St Giles, London. The incident, known as The Great Beer Flood, resulted in the release of a beer tsunami flowing onto the streets around Tottenham Court Road from The Horse Shoe Brewery which at the time stood on the corner of Great Russell Street and Tottenham Court Road. First established in 1623, the brewery was taken over by Henry Meux in 1809 and by 1811, annual production had reached 103,502 barrels.

Within the premises, there was a 22 foot high fermentation tank made from wood and held together by large rings. The vat would have held around 3,500 barrels of a stout-like substance.

Towards the end of the working day on the 17th October, one of the corroded iron rings supporting the tank snapped, resulting in it rupturing. The force of the hot liquid that was released caused an adjacent wall to collapse, in addition to several nearby vats of liquid being punctured. With nothing remaining to stop the flow of liquid, over 320,000 gallons of hot beer flooded into the street, inhabited predominantly by the poor and destitute. Nearby residents were forced to flee the approaching liquid, which within minutes had reached George Street and New Street at a height of around 15 feet. 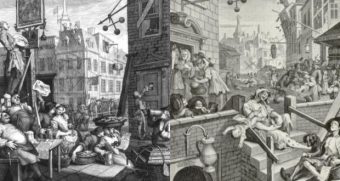 The force of such an amount of liquid saw the sad deaths of Mary Banfield and her daughter Hannah who, in a nearby house, were taking tea. In the basement of another house, a wake was being held for a child who had died the previous day. The four attending mourners all tragically perished. Eleanor Cooper, a teenage barmaid at the Tavistock Arms pub, was trapped in the rubble of a wall that crumbled under the liquid pressure. In total, eight people were killed.

The remaining beer that lined the streets resulted in hoardes of people coming to collect the liquid in any container they could find. Some resorted to licking the beer directly from the street, with reports of a ninth victim dying a few days later from alcohol poisoning.

The Horse Shoe Brewery was taken to court over The Great Beer Flood accident, but no one was held responsible as it was deemed an Act of God. The flood cost the brewery around £23,000 which is around £1.25 million in today’s money. However the company were able to reclaim the excise duty paid on the beer, which saved them from bankruptcy. They were also griven ₤7,250 (₤400,000 today) as compensation for the barrels of lost beer.

Thankfully today, procedures and legislation help to ensure the safekeeping of workers and the wider population. More can be done to prevent incident and pollution and we work hard to provide a range of advice and products to help ensure compliance. Why not take a look?