We recently created bespoke units for a large car manufacturer. This Company is a long-standing customer of Empteezy’s, with various products of ours in use across their large manufacturing sites in the Midlands.

With increased emphasis on the need for Fully Electric and Hybrid Petrol/Electric Vehicles, this Company has developed new car models with these power unit types which each uses Lithium-Ion Battery Packs. These battery packs can weigh in at almost 750kg, and incorporate an array of thousands of individual Lithium-Ion cells.

Lithium-Ion Battery Packs present a very different and dangerous Fire risk if damaged or faulty, in that they can suffer from a thing called Thermal Runaway. This is essentially a Chemical Fire which generates its own Hydrogen and Oxygen, as such it is self-fuelling, cannot be extinguished using water only and requires a specialised Fire Extinguishing medium. This thermal runaway spreads from cell to cell as each is heated up and damaged by adjacent cells. As such, they present several unique dangers and challenges in terms of Fire Detection, Fire Extinguishing and general safety. 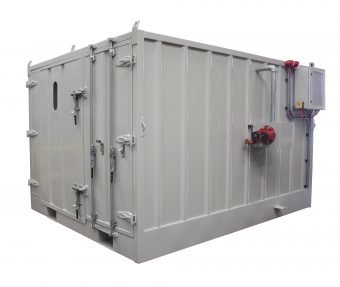 This customer approached Empteezy for advice on how they could mitigate these unique and dangerous risks whilst the Battery Packs were being stored and manoeuvred during their production process. Firstly a bespoke Bunker Unit for safely quarantining these Battery Packs on their delivery to the Factory, before being cleared as safe and accepted into the production process. Secondly and most importantly, a bespoke design of Bunker Unit in which a faulty Battery Pack already in the production process, or at worst one suffering a Thermal Runaway event in the Factory could be swiftly and safely taken to and sealed in a Bunker.

Both Bunker types must then be secure, protect Personnel, contain the means to detect a thermal runaway event, give accurate internal temperature readings, extinguish the Chemical Fire fully and quickly and provide cooling with water via a Dry Riser. The added challenge was that these Battery Packs on the production line are moved around using Automatic Guided Vehicles (AGV’s) which are essentially self-driven robot carts. Not only must these AGVs be able to enter these Bunkers when directed, but they were also required to deposit the Battery Packs in there and retreat before the closure of the Bunker. This required some particular ingenuity in design!

Nick Freeman had several meetings with the customer’s Engineers on their Research and Development site and formulated the concepts for these bunkers. With the advice and expertise of Gordon Reid, our CAD designer and Paul Whitlam of Nobel Fire Systems, final designs and specifications were finally created which fully satisfied all of the customer’s requirements.

Empteezy has over 30 years’ experience designing and manufacturing quality products. We are an ISO 9001, ISO 14001 and ISO 45001 accredited company as well as having memberships with the British Safety Industry Federation and Scottish Engineering.