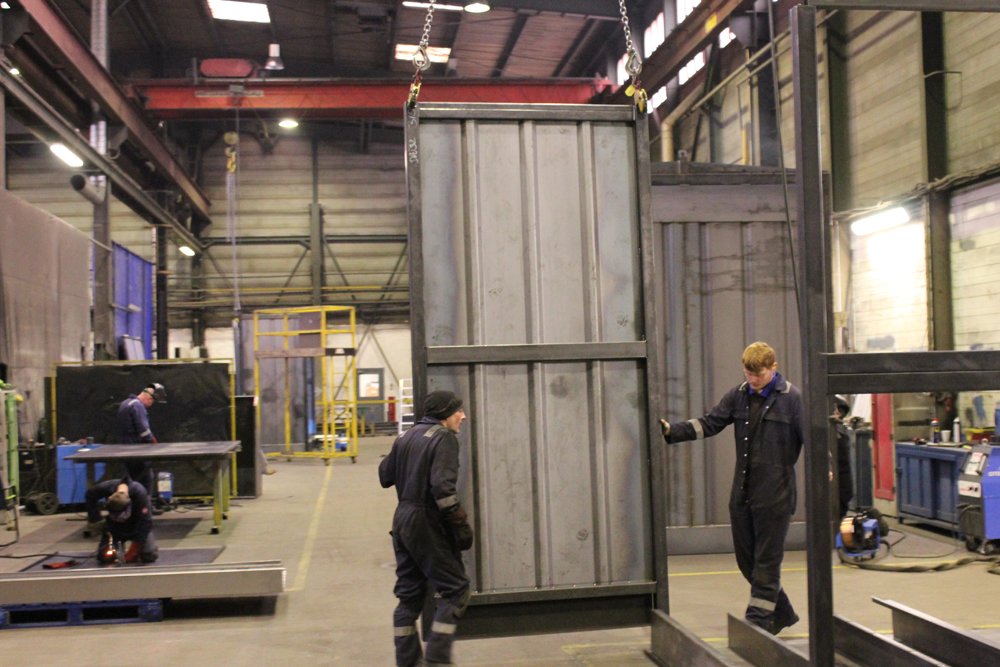 This week is National Apprentice week and we caught up with two of our apprentices to get their thoughts on what it’s like to be an apprentice at Empteezy.

Jay Stewart, 20,  apprentice fabricator and welder – works alongside his mentor, Andy Wilson. Jay’s story begins with an interest in stock cars where he first began fabricating and welding, having been taught by his father – which he enjoyed. Later, an opportunity would come up to pursue a career in this area and he was interested to try it. Having been to college previously on a different course, Jay decided to pursue the opportunity to build upon his recreational exploits when he heard about apprentice opportunities at Empteezy. He came down for an interview and started the following week and has been here for over 2 and a half years now. When asked if he enjoyed working at Empteezy? Jay said that he enjoys his work and looks forward to coming in to work in the morning and enjoys a good rapport with his mentor and fellow colleagues. Jay also states that he thinks this apprenticeship is slightly different to others he is aware of in that he thought he would be facing a series of menial tasks like sweeping up but was pleasantly surprised to be thrown right into the coalface and is actively involved in the build process.

Taylor Stewart, 20, is also an apprentice fabricator and welder and was on the same college course as Jay and had previously applied for an apprenticeship at Empteezy two years earlier, was recently taken on board by Empteezy 6 months ago. Since arriving, Taylor has been working in Empteezy’s emergency tank shower bay working alongside mentor Allan Moore and experienced welder, Mark Hollowell. In his role, Mark makes the showers and Allan and Taylor make the related components and pipe works for the showers including the screens, shrouds as well as the required fabricating. Additionally, Taylor has gained experience with TIG welding (Gas tungsten arc welding (GTAW), also known as tungsten inert gas (TIG) welding) as well MIG welding which is used in other departments in the factory to make smaller component parts like handles. Taylor states that there is a lot of learning involved at this early stage of his apprenticeship and is particularly thankful to his colleagues who are always willing to give him their time as he learns his trade.

“Because you are put on the frontline from the beginning, you are working to deadlines and there is the expectation to deliver that motivates you to learn and work to a better standard. As part of a team, you want to contribute and not make mistakes.”

“What is also better about this apprenticeship is the day release element – a lot of other students spend the majority of their time in the classroom and their workshop time is limited a couple of hours a week, max[imum] – whereas we are day-in, day-out, constantly on practical then a day at the end for relevant course paperwork. So when you go back into the classroom and they are talking about elements, we have this understanding as we have done it in the factory giving us that practical experience. We have 12 modular outcomes which require us to collect and log all aspects of a particular real-life job we are working on, logging all components and procedures undertaken for the work, start to finish.

“The first thing we are shown at college is the health and safety module, which is massively important and comes in use when you are working in this environment.”

“The Factory Manager has set up a weekly meeting with the apprentices to ensure that they feeling comfortable with their work and gives them the opportunity to make requests for additional training and support which is a great thing, it shows that they are committed to developing us and the business.”

When asked if they had any advice for other youngsters considering an apprenticeship they had the following to say – “Welding and Fabricating is a good trade to get into, it’s really enjoyable. You get up in the morning and you know that it is going to be fulfilling and challenging. At the moment, there aren’t really many standard units so each job is different in its own right, keeping it interesting.”

For more information on working for Empteezy please see our interview with our Design Team.